Another development that caught most of the world by surprise was a change in official policy between Cuba and the US. On December 17 2014, President Obama and President Castro held dual press conferences to announce the establishment of full diplomatic relations between the United States and Cuba. For context, when Vietnam was unified in 1975 the US embargo against Cuba had already been in place for almost 15 years (since October, 1960). As a result of the recent announcement between the two presidents, almost every barrier to trade and free movement of peoples between the US and Cuba will be removed, with the exception of the embargo—which only the US Congress can repeal. Historically, Vietnam and Cuba have shared a special relationship because of their ideological and independence struggles in the 20th century; perhaps Havana can learn from Hanoi’s experience in transforming into a “socialist-oriented market economy” and beyond. US investors and entrepreneurs will only be too willing to help as well.

As we enter deeper into 2015, there are many developments, changes, and policy implementations to look forward to and to make sense of. Above all, there will be increased amounts of competition in Vietnam—both from foreign and domestic players looking to capture a piece of the steadily growing economy. However, organizations operating in Vietnam should be on the lookout for commodity price swings (notably oil), currency fluctuations (as we are seeing with the Euro and the Swiss Franc), and new signs of saturation in certain domestic industries (such as motorbikes), all of which could stymie economic growth.

January 1st brought new visa rules for foreigners with a complete overhaul of the old system. Basically, the number of visa types is increasing from 10 to 20 and there are new entry and exit requirements.

The former tourist visa (C1) is now “DL” visa and the former business visa (B3) is now an “DN” visa. One of the major changes of the new rules is that visa types cannot be changed while the applicant is in Vietnam, which means that tourists desiring to become English teachers (seemingly the majority of westerners) will now have to leave Vietnam and re-enter under the correct visa scheme.

Regarding the exit requirements for foreign nationals, they are listed below.

1. A foreigner may be suspended from exit in one of the following cases:

b) He/she has to implement a judgment or decision of the Court or a Competition Settlement Council;

d) He/she is obliged to implement a decision on penalties for administrative violations;

dd) For reasons of national defense and security.

2. Clause 1 of this Article is not applied to people who is serving a prison sentence and taken abroad to provide evidence as prescribed by Article 25 of the Law on Judicial assistance.

3. The duration of suspension from exit shall not exceed 03 years and may be extended.

It will be interesting to see how these exit requirements will be implemented—and if they will be pared back once they are practiced on the first few cases, which will surely receive widespread publicity.

Additionally, foreigners now have rights that are outlined in the same legislation (which wasn’t explicitly stated previously):

Chapter VII, Article 44.1. Foreigners that enter, leave, transit through, or reside in Vietnam are entitled to:

There are other rights and obligations, so you can view the actual legislation here if you’d like to know more about the change in visa law for foreigners.

Additionally, the are a number of other laws that will take effect in 2015 such as the Amended Property Trading Law and the Amended Housing Law which will impact foreigners; they will set new equity capital requirements for real estate businesses and property projects, and allow foreigners to own a house in several specified forms, respectively. Moreover, there are other laws that will have profound changes for foreigners seeking to invest and own businesses in Vietnam, such as the Law on Enterprises and Law on Investment.

Earlier this month, Vietnam repealed a same sex marriage ban, boosting the nation to the head of the pack for gay, bisexual, and lesbian rights in the region. Both Hanoi and Ho Chi Minh City have yearly gay pride parades in the past which have been growing in popularity with each passing year.

The change in marriage for same-sex policy couldn’t have happened at a better time, as the new American Ambassador, Ted Osius,  was officially received in Hanoi last month. Ambassador Osius and his partner, Clayton, have a son, Tabo, making theirs a truly multi-cultural family and perhaps an archetype that will be more represented in the 21st century–in Vietnam and beyond.

Your author had the opportunity to meet with Ambassador Osius during a dinner last week in Hanoi–we have both lived in HCMC and Hanoi, albeit during different eras. More importantly, we also spoke about encouraging American students to study abroad in Vietnam as a way to change the perception of Vietnam in the US, which currently has approximately 16,000 Vietnamese students studying at higher education institutions. Overall, Ambassador Osius spoke openly and candidly about his priorities for his tenure here in Vietnam, some of which you can find here. We are excited and look forward to a new chapter of relations between Vietnam and the US.

The Trans-Pacific Partnership (TPP), once finalized, will set the stage for the US to be Vietnam’s largest trading partner. Additionally, Vietnam and the Customs Union will also be finalizing their agreement later this year. Once both agreements are executed, it will deliver a big boost to Vietnam’s trade activities.

Also this year, Vietnam must fulfill its World Trade Organization (WTO) obligations of permitting the establishment of wholly foreign-owned businesses, including retailers and wholesalers. Furthermore, integration with ASEAN Economic Community (AEC) allows the free flow of goods and technical (highly skilled) personnel this year (and will slash tariff rates to zero by 2018). Vietnamese companies might be woefully unprepared to compete against new products and services from outside of Vietnam coupled with foreign businesses right in their backyard—but it’s still not too late for Vietnamese business stakeholders to change directions.

Industries, Opportunities, and Trends to Watch Out for in 2015

-Continued and extended education; for workers and students, respectively 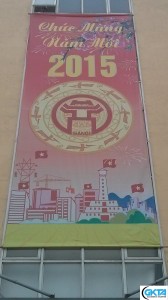 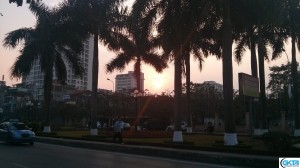 Winter in Hanoi, can you believe it? 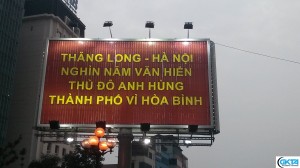