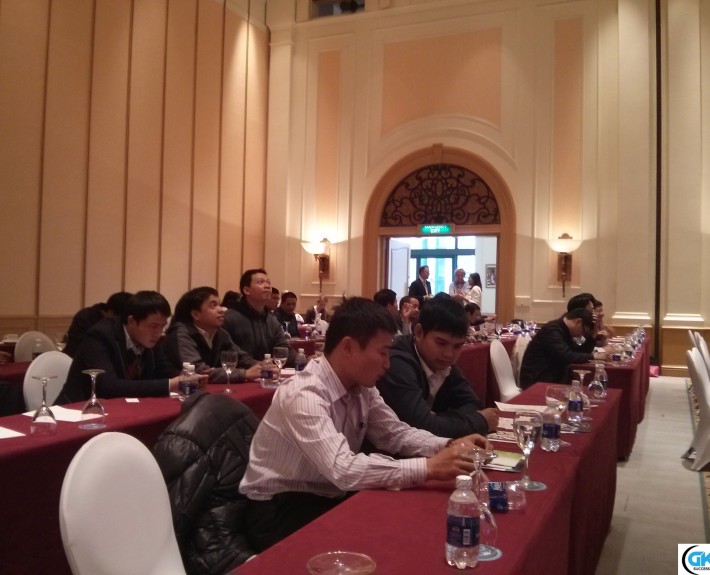 The crowd at the AMX Seminar at the Hanoi Daewoo Hotel on December 3, 2014.

Building a successful brand in Vietnam (or anywhere) requires having a clear idea of local consumer (and by extension, social) norms, trends, and perceptions (i.e., market in general) in addition to understanding the local, regional, and national cultures for successful positioning in a country. Yes, conspicuous consumption exists here in Vietnam but for many brands, simply copying and pasting a western marketing campaign won’t work beyond luxury brands that convey a sense of status to those around the targeted consumer. Sometimes, understanding a market means a change in mindset.

This week we are taking a look at three modern scenarios: the first, a globally known brand seeking to capture market share in Vietnam; the second, a local brand growing domestically (and which could eventually lead to the third scenario); and the third, a local brand entering foreign markets (which will most likely increase in the future). We’ll also explore some potential ways forward for Vietnamese companies in the future.

Earlier this month, we were invited to the first ever AMX Seminar in Hanoi, which was followed up by a similar version a few days later in Ho Chi Minh City (HCMC). The audience in Hanoi was primarily comprised of 20-30 Vietnamese Systems Integrators (SI) with less than five foreigners in the audience. After the half-day presentation, we were asked to give feedback on the potential for the AMX brand in the Vietnam market and how to improve service and support overall.

In short, the event was a solid step toward establishing the AMX brand in Vietnam but it won’t be an easy win in this market as Crestron, Savant, and Extron are all available here as well—not to mention local and/or less expensive offerings. So, there’s definitely opportunity for AMX (and any technology brand) to establish itself as a market leader and ride the growing economic wave here—but it will have to be in a personalized manner that resonates with Vietnamese stakeholders and/or expat decision makers.

These technology brands don’t have counterfeit and quality issues to deal with because their products are sold through authorized dealers and country distributors. For other industries, such as cosmetics, there exists a trust deficit: how do local consumers know the products that they are buying are authentic? Thus, consumers prefer hand-carried cosmetic items from trusted friends or associates who are traveling to Vietnam from more developed markets such as Hong Kong. After all, skin and eye products are the ones that you don’t want to be cheap on.

Another company that is building a (completely) new brand here in Vietnam is Emigo, which is owned by VinFashion of Vingroup. The Emigo brand was launched earlier this year and it already has two open locations including Vincom Center Ba Trieu and Vincom Mega Mall Times City. Approximately four additional locations are slated to be opened throughout Hanoi in the near future.

The Emigo brand has the potential to make an impact on the fashion scene here since its offerings are more affordable than brand name imported clothing lines (its designs are similar to Zara or H&M) and there is always an element of national pride in buying from a Vietnamese brand. It remains to be seen how the Emigo brand will be built domestically but for sure Vietnamese shoppers will want to inspect the materials and quality of the real products for themselves before deciding whether or not to buy into the brand.

If Emigo can resonate with local consumers then it might be able to build momentum here and expand abroad—if those are indeed the plans that VinFashion has in store for the brand. Still, could we see Emigo products in western stores one day? If so, then perhaps the clothing label will read “Created in Vietnam” in addition to “Made in Vietnam.”

Brands coming into Vietnam have the advantage of prestige and case studies in western markets—but what about the reverse situation? How would a Vietnamese brand fare in the global marketplace? When foreigners hear “Vietnam,” what is their impression of Vietnam, i.e., what is Vietnam to them? And, what is Vietnam known for globally? These are all questions that Vietnamese brands looking to go abroad will have to find the answers to in order to enter new markets in the most efficient way possible.

A Vietnamese client recently told us that they wanted to build a “Vietnamese iPhone” in part due to the success of Apple’s iPhone in Vietnam and the rest of the world. Instead, we suggested that they differentiate their product by creating a secure smartphone (similar to the Blackphone or Boeing Black). Given last year’s revelations by Edward Snowden and Glenn Greenwald, security conscious companies might prefer another option for secure handset communications beyond American and Chinese manufacturers, especially if the alternative price point is attractive. Or a suitable Vietnamese startup could always take a page from Xiaomi’s book (2010 wasn’t so long ago).

The growing risk for Vietnamese companies who have the technical skills to produce something for other markets is that they might create something that only Vietnamese consumers will like. For example, when Yamaha Vietnam unveiled its website redesign in a “flat design” style, the feedback they got from Vietnamese visitors was that the website had no information and was hard to navigate. Vietnamese taste and design considerations can be very unique, even in Southeast Asia. Another way to think about about going to another market is that it’s not realistic for an American company to come to Vietnam, do things the “American” way and expect to be successful. Similarly, how do you think a Vietnamese company trying to do things the “Vietnamese” way in the US (or any other country) will fare?

During a conversation last week with some Vietnamese/New York fashion industry insiders in Hanoi, we discussed how to create and position a future clothing brand here in Vietnam. What is Vietnam’s competitive advantage in manufacturing? Vietnam’s current advantage is its low cost of labor (in addition to other financial incentives) which has prompted giants like Samsung and Intel to setup multi-billion dollar manufacturing facilities here.

However, inexpensive labor won’t last forever nor will Vietnam’s “Golden Population Structure” remain intact. Just as investment has flowed into Vietnam from China, so too will investment flow into a location with less expensive labor costs—perhaps to another neighbor as well. So looking ahead, what product or service might Vietnam have in the future that will give it an advantage in the global marketplace?

Today, Vietnam has plenty of raw materials but they aren’t finished goods which Vietnamese manufacturers can command a premium for. Not to mention that we live in a world of limited resources, so what can Vietnam offer the world in the future? One way to answer this question is to think about the challenges that Vietnam will face in the future (and that other countries will have as well). If Vietnamese companies continue to or start working on solutions for those problems then they can be ahead of the curve. After all, there is innovation here–many Vietnamese are “professional improvisers” in their daily lives and they are quick and resilient learners, as history has shown.

In the future, Vietnam won’t be the only country that has a rising national power consumption (and therefore rising demand for coal if alternative sources don’t emerge), it won’t be the only country with more cars on the road (and therefore more air pollution), and when sea levels rise it won’t just affect a single city like Can Tho in the Mekong Delta—it’ll affect hundreds of cities and displace millions of people. The point here is that the challenges of the future won’t be exclusively Vietnamese, but Vietnamese-origin—and not uniquely Vietnamese—solutions can be used to solve the challenges of the future (if those problems are solved here first or at the very least knowledge can be shared abroad). However, it takes a long term mindset to truly tackle these transnational issues of our time in addition to investments in education, human capital, and financial resources for research and development.

Peter Drucker, the 20th century’s greatest management thinker advised to always choose the long term, because it always comes true. Focus on your long-term strategy, but take advantage of the short-term opportunities in the meantime–that’s how a future brand in Vietnam will be forged, and how Vietnam–the brand–can begin to take shape as well.